DJ Vela made her creative debut in this world some time ago in Sofia, Bulgaria. Starting at first as a member of an experimental-electronica live band “Trixter”, then organizing underground dance events in BG, taking part in some avant-garde performance groups and attending theatrical school, finally she found here “true-self”, becoming a DJ in the late 90s.
Since moving to Berlin in 1998 she’s been kept very busy, mainly Djing, but also producing music and inaugurating and running, together with Ed2000, the independent record label “Dangerous Drums”.
A new project, starting in June 2006, is the selection, creation and live performance on stage of the music for the theatre Play “Cengiz & Locke” in Berlin’s renowned GRIPS theatre.
Her funky, witty, electrifying mix of electro, house and breaks brings each and any dance floor to boiling point, which has resulted in her being in demand in many leading clubs across Germany and around the world (UK, Japan, USA, India, Holland, Poland, Spain, Russia, Italy, Switzerland, Hungary, Bulgaria, Rumania…), playing also at festivals and other big events (Love Parade, StreetParade (Zürich), Glade Festival (UK, 2005), Fusion Festival, Summer Spirit Festival, Liberty One Festival, Karneval der Kulturen, FuckParade, ….) and at some remarkable art happenings such as The Queens Jubilee @ the British Council Berlin, “Black Atlantic – Black British Writing” and the opening of the “Chi Mech”-Tour of the Dead Chickens.
Vela’s activity as a music producer is not yet as remarkable as her djing achievements (well, with that amount of bookings it is difficult to spend time in the studio), but still, her “Irresistible”, released on the Dutch label “Moving Targert” in 2002 made it into the UK top 40! Another one of her tracks, “Ol’ witche’s jig”, was featured on the soundtrack of an independent theatre piece in Detroit, USA. And she is one of the 6 winners of the ADIDAS remix contest for the advertising campain for the Football World Championship 2006! You probably will have seen the ADIDAS advertising, the recruitment movies with DJ–rmxs running on MTV channels all over the world – dj Vela’s Remix used to underpin the Japan-Italy game.
Upcoming releases include a Dj Vela track on a Japanese techfunk compilation. Watch this space !
Vela has also been with TWEN FM radio, since its very beginning as a pirate station, where she has a one hour radio show, every Wednesday 1.00 till 2.00h, and for 2 years she was hosting a weekly radio show on dj-sets.com.
2007 Dj Vela was joining „Electric Shepherds“. 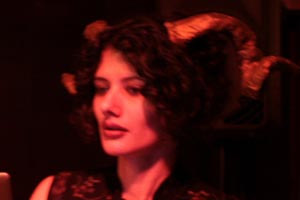